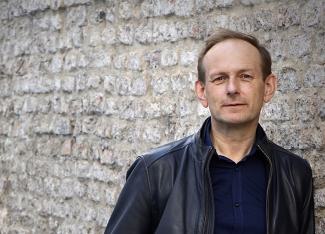 Rüdiger Lotter has been Artistic Director of the Hofkapelle Munich since 2009.

As one of the most interesting and versatile baroque violinists of his generation, he has also recently made a name for himself as a conductor in the field of historical performance practice.

In 2014 he conducted the opera Orfeo by Chr. W. Gluck in an acclaimed performance at the Festival "Days of Early Music" of the West German Radio in Herne. Two concerts with arias sung by the countertenor Valer Sabadus in the Düsseldorf Opera and the Prinzregenten Theater in Munich were received enthusiastically by audience and press.

His interpretation of the Brandenburg Concertos, released in 2013 by Lotter and the Hofkapelle Munich for Sony Music 2013, was showered with praise by leading musical journals. The magazine "Fonoforum" wrote: "Lotter's interpretations of these classics reflect the spirit of our times and can easily measure themselves with the leading recordings of recent years. [...] it is difficult to decide which qualities out of so many could be called the highlights.”

From 2011 to 2014 Rüdiger Lotter was in charge of the baroque productions for the orchestra of the Ludwigsburger Schlossfestspiele. Since 2013 Rüdiger Lotter has also been a regular guest at the festival "Styriarte" in Graz, his focus being the festival orchestra. In 2010 as part of the "Classic Today" series, Rüdiger Lotter conducted the West German Radio Symphony. In 2009, the well-known stage designer and director Anna Viebrock invited him to the Schauspielhaus Basel for a production as musical director. In the same year he was invited by John Neumaier to the Staatsoper Hamburg to participate as a soloist in the premiere of the ballet creation "Orpheus". As artistic director of the Hasse Society in Munich, he has also been involved in the rediscovery of the works of Johann Adolph Hasse. In 2011 he was instrumental in initiating a new performance of Hasse's opera "Didone Abbandonata" in Munich's Prinzregententheater.

As a soloist or with his chamber ensemble Lyriarte he performs regularly at all major festivals in Germany, Austria, and Switzerland. His solo CDs in collaboration with Oehms-Classics were received enthusiastically by the international media. His recording of the solo Sonatas by Johann Sebastian Bach was credited by the West German Radio with being currently the most interesting interpretation on the market. "The early music review" wrote: "His Bach is among the best I have ever heard; I have put off writing this review, hoping sufficient words would occur to me to convey what it is that is so striking“.

Rüdiger Lotter’s CD "Biber-Berio", with Irvine Arditti as a chamber music partner, garnered much praise for its innovative conception. He has received several awards, among them from the prestigious "Premio Bonporti" competition in Rovereto (Italy) and the international Heinrich Schmelzer competition in Melk (Austria). In 2007 Rüdiger Lotter was guest professor at the University of Music Trossingen.