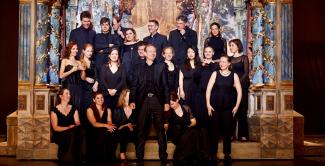 The Hofkapelle München is seen today as the leading ensemble for historic performing practice in the south of Germany. Since its re-formation in 2009 under the artistic direction of the renowned Baroque violinist and conductor Rüdiger Lotter the Hofkapelle München acquired an excellent reputation. Thus the Süddeutsche Zeitung wrote in 2013: “One is inclined to place Lotter and his Hofkapelle München among the very best ensembles specializing in Early Music, but the Hofkapelle would stand out clearly with its magnificent concentration and the literally addictive pleasure they take in playing.“

One of their musical focus is based on Bavarian’s rich musical past. Until 2013 the Hofkapelle also regularly cooperated with the August Everding Bavarian Theatre Academy in selecting repertoire and doing productions of 17th and 18th century opera. One highlight of the cooperation was the 2011 production of Johann Adolph Hasse’s opera “Didone abbandonata“, under the baton of Michael Hofstetter. The ensemble’s 2013 opera production, “Adelasia ed Aleramo“ by Simon Mayr conducted by Andreas Spering, was likewise a great success. “The Hofkapelle München performs the opera on original instruments at a fabulously high level“ - thus the reviewer of “Der Donaukurier“.

In 2012, together with the countertenor Valer Sabadus, the orchestra was awarded the German Record Critics’ Prize for their CD “Hasse reloaded“. The next very successful recording were the „Six Brandenburg concerts“ of Bach in 2013. In 2014 the Hofkapelle München recorded together with Valer Sabadus his new solo CD “Le belle immagini“ under the baton of Alessandro de Marchi. This CD was awarded the Echo Klassik 2015. In September 2015 the CD „Angel Devil Priest“ got released with violin concertos of Locatelli, Leclair and Vivaldi, where the French-Armenian violinist Chouchane Siranossian played the solo parts alternately with Rüdiger Lotter.